Another great recipe for lemon cupcakes, this recipe is from Food Network magazine, May 2014 issue.  This cupcake is very lemony and very moist.  I usually buy Food Network magazine, but I buy it mainly in the fall and winter and spring.  The main reason for not buying it as much in the summer is because so many recipes are about grilling, fruit salads and summer vegetables.  Now, I have nothing against any of the three things mentioned because I love all of them, I just do not feel there are enough baking recipes in the summer issues, not enough to buy the magazine in the summer months anyway.

For the Candied Zest

To Make the Cupcake:

1. Preheat the oven to 350F and line a muffin pan with 12 cupcake liners.  Combine the flour and almonds in a food processor and pulse until the almonds are finely ground, about 1 minute.  Add the baking powder, baking soda and salt and pulse to combine.

2. Whisk the eggs, sugar, buttermilk, vegetable  oil, lemon zest and juice in a large bowl. Add the flour mixture and whisk until just combined.  Divide the batter among the muffin cups, filling them three-quarters of the way.  Bake until a toothpick inserted into the centers comes out clean, 16 to 18 minutes.  Let cool in the pan 5 minutes; remove to a rack to cool completely.

4. Add the butter a little at a time, beating until incorporated.  (It’s ok if the mixture looks curdled at first; continue beating).  Beat in the food coloring, then add the lemon zest and juice  and beat until smooth, 2 more minutes.

5.  Make the candied zest.  Remove the lemon zest with a vegetable peeler and slice into thin strands.  Place in a small saucepan, cover with water and bring to a simmer over high heat. Drain the zest and return it to the saucepan; cover with water and repeat 2 more times.  Bring the sugar and 3/4 cup water to a bare simmer in a separate saucepan, stirring until the sugar dissolves.  Add the lemon zest strands and cook over low heat, 20 minutes.  Drain the zest and arrange in clusters on a parchment-lined baking sheet, let dry.

6. Frost the cupcakes and top with the candied lemon zest.

Wipe the bowl of an electric mixer with a paper towel and vinegar to remove any trace of grease.  Add egg whites and sugar and simmer over a pot of hot water (not boiling), whisking constantly until temperature reaches 140F, or if you don’t have a candy thermometer, until the sugar has completely dissolved and the egg whites are hot.

With whisk attachment of mixer, begin to whip until the mixture is thick, glossy and cool.  Switch over to the paddle attachment and, while mixing on medium speed, gradually add softened butter in chunks until incorporated, and then mix until it has reached a silky smooth texture (if it curdles, keep mixing and it will come back to smooth).

Keep in an airtight container in refrigerator for up to one week, leaving out at room temperature when needed, re-whipping in mixer for 5 minutes.  Can freeze for up to 6 to 8 weeks.

One thought on “Triple Lemon Cupcakes” 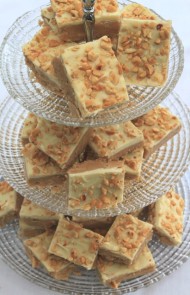 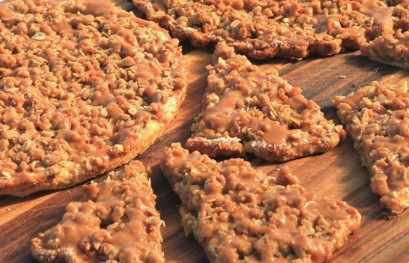