I’m always a happy camper when I find a recipe that takes me back to yesteryear and this one takes me back! I remember packing Hostess Twinkies, Snowballs and especially Hostess cupcakes in both my son’s lunchbox.  I recently had a yard sale and came across a shirt that my youngest used to wear when he was in his early teens and still living at home.  When I saw the shirt (that no one purchased), I was so happy it was still there.  I had not seen the shirt prior to my yard sale.  I had pulled some clothes out of a box I had stored in our garage and somehow missed seeing his shirt.  I was happy it was still there…and now it’s hanging in my closet.  Ohhhh how I wish I could go back in time to relive some of those precious moments.  The only thing I can do now it to recall events from the past that remind me of our closeness.  Ohhhh, cupcakes!!!  Hmmmmm, let me continue!

I learned a valuable lesson while making these cupcakes, a lesson I hope to never repeat!  I’ll let you know what went wrong while making them…well, did you know if you beat whipping cream too much, your recipe will never turn out…no matter how much longer you beat it!  This was an expensive mistake because the store only had small container’s of whipping cream at $3.97 per container, and I needed 3 of them!  Okay, so if you did the math you already know it was pretty expensive whipping cream! I could have gone to another store, but I was there, right there, right in front of the case.  You know how it goes when you only have so much time to make what you want to make…so, you just do it!!  You buy it!! lol   Ohhhh, cupcakes, now where was I?

I love this recipe so much so, that once I make the cupcakes, I have to get them out of the house or I eat the whole bunch of them! I hope you enjoy them as much as I do!

Swirls on Top of Cupcakes:

In a large bowl beat the butter 2 minutes until smooth and creamy.  On medium speed gradually add the sugar, beating until light and smooth 5 minutes.  On low-speed beat in the eggs and egg yolk one at a time.  Beat in vanilla.

On low-speed add the flour in 4 additions beating well after each one.  Drizzle in 2 tablespoons of hot water one at a time, mixing briefly until a smooth batter forms.

Fill the cupcake liners with 1/4 cup of batter each.  Bake 18 to 20 minutes until a toothpick comes out clean from the center.  Cool in pans on a wire rack 10 minutes then remove and completely cool on wire racks.  If your cupcakes rise too high and aren’t flat on top you can turn them on their side and slice off the tops with a serrated knife to make them level.  Save them and make mini whoopee pies with the leftover filling.

Beat all ingredients together until smooth and until it’s like whipped cream and doesn’t taste sugary.

Use for cupcakes and filling.

To Make the Chocolate Ganache:

Chop 2 and 1/2 ounces of a bittersweet chocolate bar finely and put in a heat proof bowl.  Heat the heavy cream to a simmer in a small saucepan.  Pout over top of the finely chopped bittersweet chocolate bar and let sit for 2 to 3 minutes and then whisk until smooth.  Dip each cupcake top into the melted chocolate and let excess chocolate drip into the bowl.  Then turn upright until the ganache dries. Once the chocolate has dried on all your cupcakes, they are ready for the swirls on top.

To Make the Swirl Icing:

Whisk confectioner sugar with a teaspoon of milk, add more as needed to make a thick icing.  If the icing is too thin, your swirls will run together.  It’s important to have your swirl icing as think as you can and still be able to pipe it out on top of the cupcakes.  True Hostess Cupcakes have 7 swirls, but it your only able to make 5 or 6 that’s okay, no one else will be counting the swirls! If your icing is too thin, add more confectioner sugar, if it’s too thick, add more milk, but only a teaspoon at a time. Pipe out your 7 swirls starting at one side of the cupcake and ending at the other side. 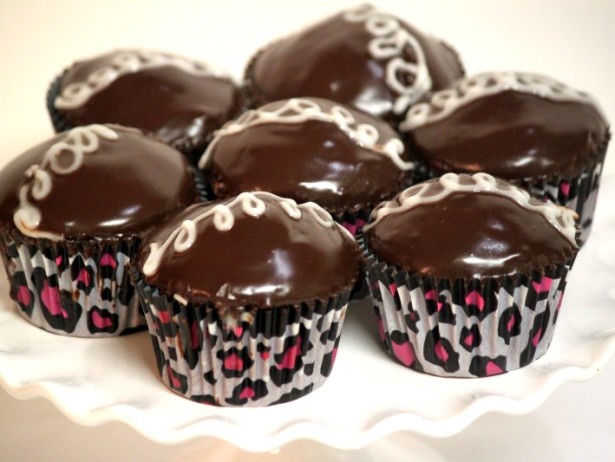 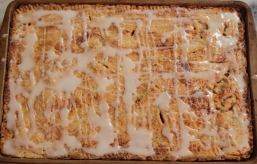 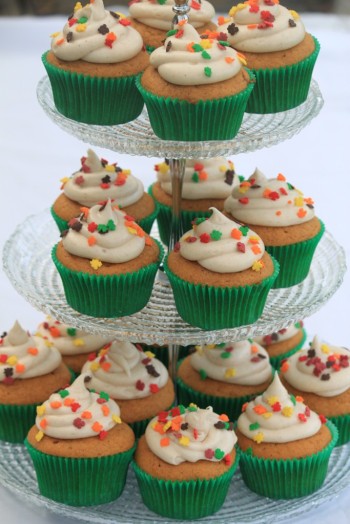